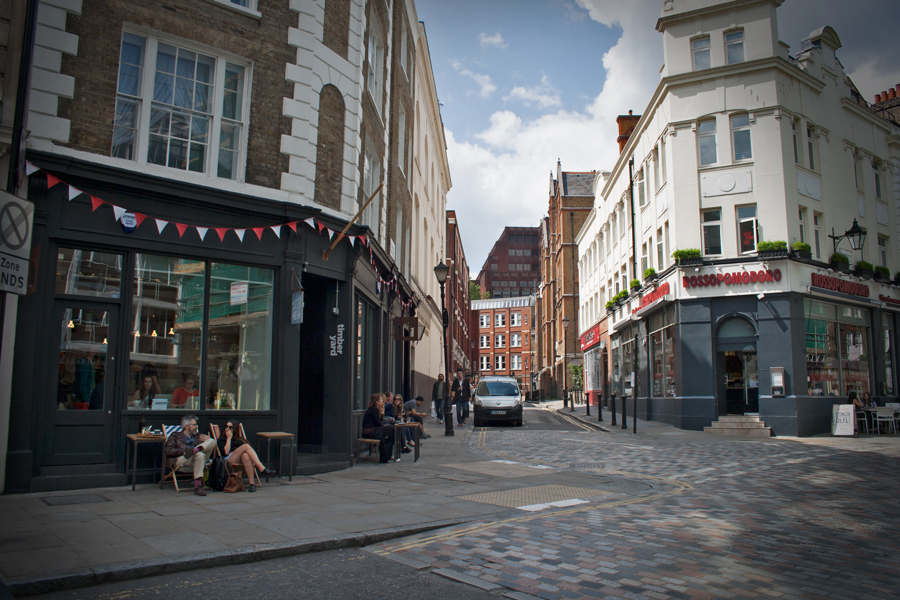 As I love to wander around with my camera trying to catch some of the hidden treasures of a city, of its atmosphere I decided to do at least a bit of Sightseeing when I was in London. I walked along the Themse through South Bank, passed the OXO Tower, had a look into Tate Modern where I visited a little exhibition about “Poetry and Dreams” and on my way to “The Shard” I came across this wonderful food market:

The market is located under some railway bridges. So when you look up there are metal pillars that form an interesting contrast to the antique market stands. It’s one of the oldest food markets in London and has a very unique atmosphere.

As I mentioned I passed the OXO Tower and the inner courtyard struck my attention. There was a little café inside and the opposite brick wall was sprayed with words. One part of the wall was dotted with colorful glow-sticks – a funny thing about that: some days later this building appeared in one of my favorite series “Sherlock” 🙂

… And here are some more pictures I took in the attempt to catch a bit of Londons atmosphere:

I'm Anna, a 32 years old graphic designer based in Cologne, Germany. This Blog is about the never-endling journey of life. It's about reminding myself to stay awake and curious, of seeing things from another perspective. Feel free to take part of my journey and be inspired! :)