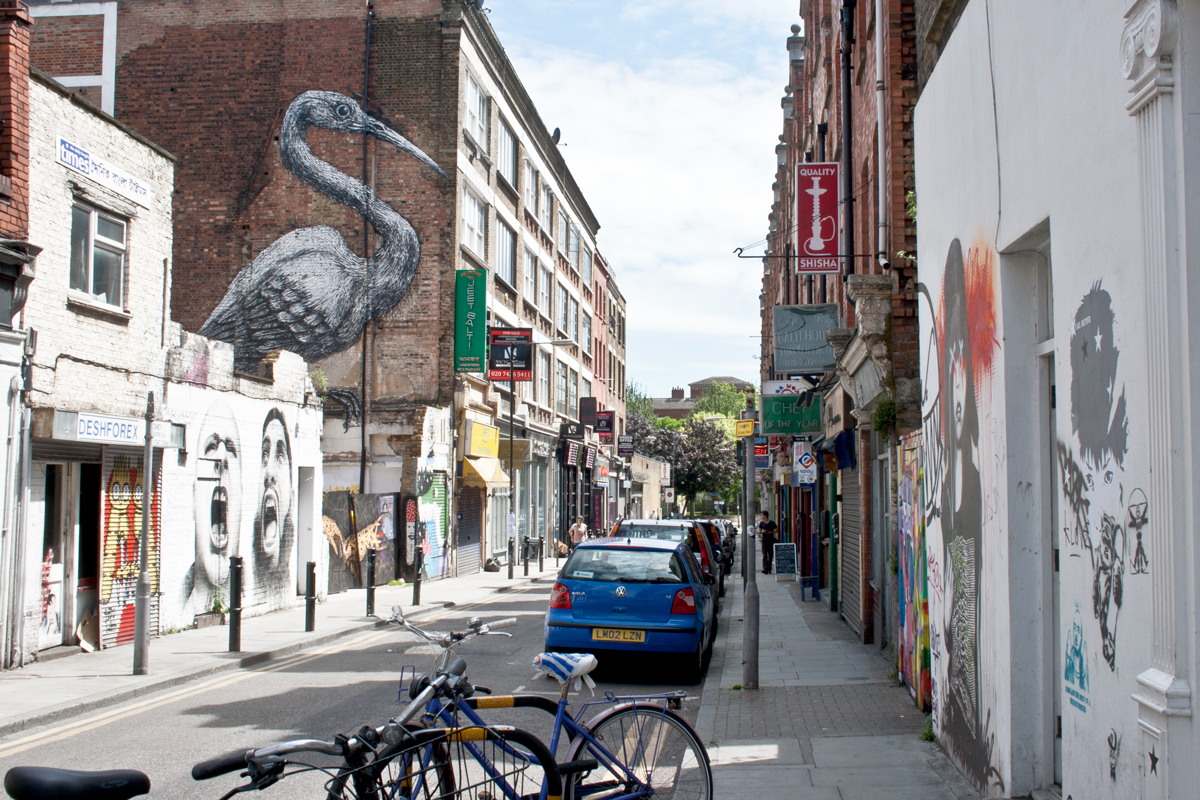 Last Saturday I attended a Street Art Tour through East London (Shoreditch) with my London-based friends Elly and Filipe.

Our Guide: a small, sporty woman with a French accent, husky voice, dark hair, black eyes and a quite nice tattoo on her neck (two f-holes like you can find them on violin instruments) that just appeared when she was turning her head and when her plait flew aside. She told us a lot about the different artists and street art techniques.

Here are some of my favorite ones (I show you not only pictures from this Street Art Tour but also from a tour through Brick Lane and surroundings I did on my own two years ago):

Known for his contemporary photorealistic portraiture. His images often depict people who live in the area where he paints, mainly members of the Chicano and Mexican community with whom he grew up.

Also known as “Tape Artist” creates his artwork with black tape on windows.

Artist from Paris who works with tiles in different sizes to create pixel-like characters. His work is an homage to the 80s video game Space Invaders.

The artist from Lisbon has developed an archaeological style of portraiture. It’s a kind of “creative destruction” of the wall ground since he uses a cordless hammer drill to carve out the portraits.

His work is a fusion of graffiti and fine art techniques. He creates huge frescos depicting figures of the Napoleonic military era and battle scenes.

Of course BANKSY’s artworks mustn’t be missing on this tour 😉 As our guide said: “Nowadays you recognize a REAL Banksy by the plexiglass in front of it.” We catched one of his artworks a the CARGO bar in Shoreditch. The other two pictures where taken in 2012 on my last London trip.

Originally from South Africa the artist covered London with a lot of large, bright mushrooms atop buildings, bridges and walls while he was living in the city for three years.

If you’re interested in doing the tour by yourself – here is the link: http://streetartlondon.co.uk/tours/

There is also a very recommendable App with additional facts about the artists and a London map with the artworks marked on it.