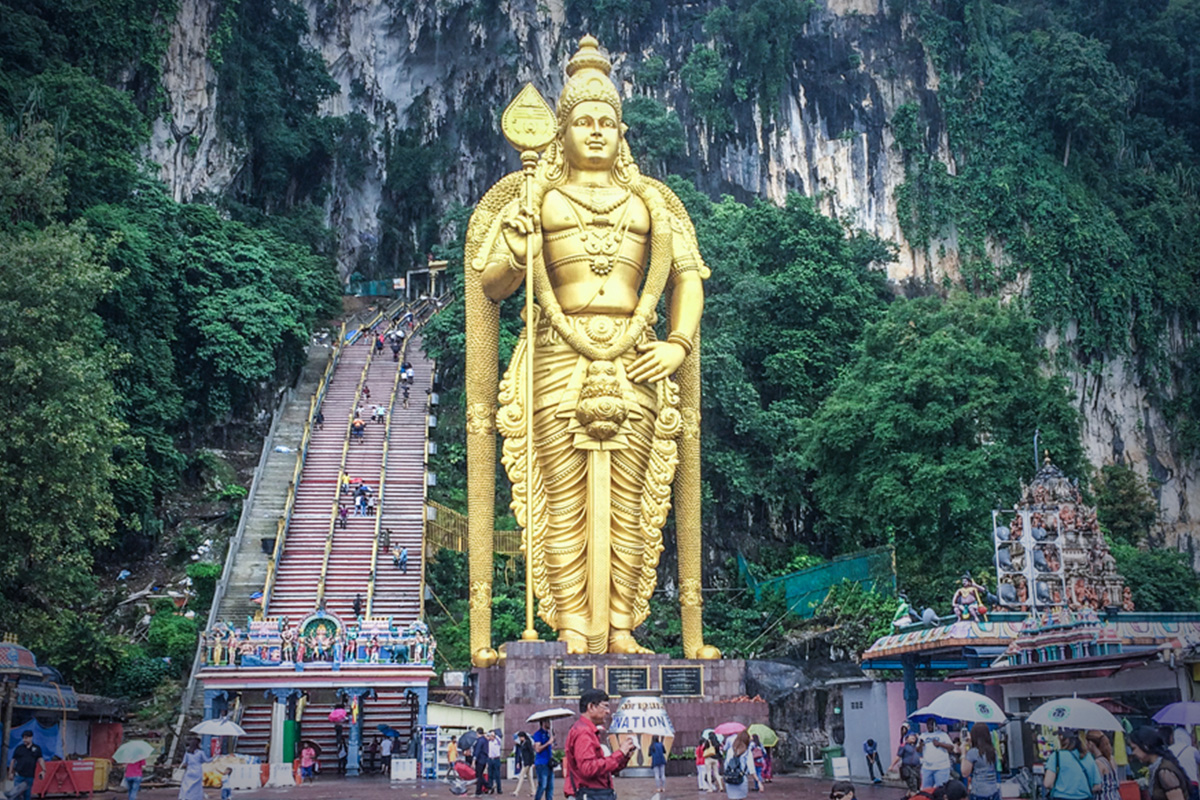 When I woke up the first morning in Kuala Lumpur there was a heavy thunderstorm passing by and I could hear an alarm bell from the inside of the hostel. I quickly jumped into my pants and opened the door of our female dorm. The hostel’s courtyard, a wonderful open-air common area, was flooded and the staff was trying to keep the water from entering the kitchen. I went back into my room to take a look out of the window – the streets were flooded too and the cars were driving through brown masses of water. Welcome to Asia, I thought, this is what monsoon season looks like.

Downstairs in the kitchen area I met Rodrigo – a Brazilian photo- and videographer with fascinating blue-green eyes. It was just after I left KL that I realised what a talented man I had met. Equipped with different cameras and even a drone he creates stunning pictures and videos from around the globe. 🙂 For example this one:

“Created with footage shot in 8 countries in South and Southeast Asia, SOULSEARCH offers a panoramic view of the spiritual practices, rituals, traditions and ancient religious/pilgrimage sites in the region.”

The BackHome Hostel – a wonderful place to stay

After staying in a private room in Malacca – the first spot on my journey through Malaysia – it was hostel-time again 😉  Through the website hostelworld.com I had found the BackHome Hostel. I stayed in a female 4-bed dorm together with crazy curly Joyce from the Netherlands and Maria from Argentina – two beauties with a lot of power 😉 The fourth bed was occupied by different women during my stay. On the first night it was Chiyo Kamino – a japanese writer with a pleasant calm appearance and on the other days Veera from Finland who was just about to start a semester abroad.

I absolutely loved the atmosphere of the hostel! 🙂 The historical core of the building, consisting of six shop houses from the colonial-era, has been restored into a spacious, contemporary accommodation. Moreover the hostel has two wings which are connected with a small bridge. From the bridge you have a wonderful view into the open-air courtyard with its sitting areas. The courtyard can also be used to have breakfast or lunch and it’s a great place to get in touch with other travellers.

the bridge leading to the bathrooms

Close to Kuala Lumpur there is one of the most popular Hindu shrines outside India: the Batu Caves. It’s a limestone hill with a series of caves and cave temples named after the Sungai Batu (Stone River) which flows past the hill.

The shrine is dedicated to the Lord Murugan who’s huge golden statue (42.7 m (140 ft) high) welcomes you at the entrance. To reach the biggest cave (the Temple Cave) you have to climb 272 steps while being surrounded by apes 😀 It was my first encounter with apes in the wild ever! To avoid being attacked you better store everything that looks like food in your backpack. 😉

Apes everywhere around you 😉

Hindu temple within the main cave

As the Batu Caves are just a 26 minutes train ride away from Kuala Lumpur I spend my first day  discovering the monument. Unfortunately it was raining all the time and I had forgotten to take a warm jacket with me for the train ride. The trains in Asia in general are air-conditioned very well and you easily get a cold if you’re dressed too light.

From Islamic architecture to the green oasis of KL

Back from my trip to the caves I met Sarah in the hostel. A half French half Algerian woman from Paris. Just like me she was on her first big trip – leaving the safe borders of Europe behind for the first time. And even if she was still struggling a little bit with the English language you could feel her willingness to reach beyond her shadow on this trip 🙂

From the hostel we walked to the National Mosque (Masjid Negara) …

Side entrance of the mosque

… and to the Botanical Garden:

I was lucky to be in Kuala Lumpur during the celebration of the 59th Independence Day. The evening before that day is called “Merdeka eve” and the Malay celebrate it with a huge party and firework in front of the Petronas Towers.

It was already late in the evening when Joyce entered the dorm and tried to convince me to join her and some other people from the hostel to go out to see the firework. Even if I was still feeling a bit tired and ill from my trip to the Batu Caves I decided to jump out of my bed and it became a really cool evening 🙂 (unfortunately I realized too late that the storage of my mobile phone was full so I couldn’t take any photos or videos 🙁 )

When I travel alone I always take a look into the couchsurfing community to see if I can find any interesting person who lives at the place where I want to go. This is how I found Nurul! 🙂 A Malay woman with Filipino roots who lives and works in KL.

I arranged to meet her on my last day in KL and asked her to show me her favorite places of the city. We first met for a coffee and talked a lot about various topics – we were on the same wavelength immediately 🙂 Usually I love to walk a lot through the streets of a city to absorb the urban atmosphere but in Asia it’s just too hot and loud and there is smog everywhere. :-/ So we mainly stayed inside, walked through some shopping malls and met Nurul’s Indian colleague for lunch:

Here are some sightseeing tips for Kuala Lumpur. Since I spend only three nights in Malaysia’s capital I didn’t have the time to discover all these tips by myself.