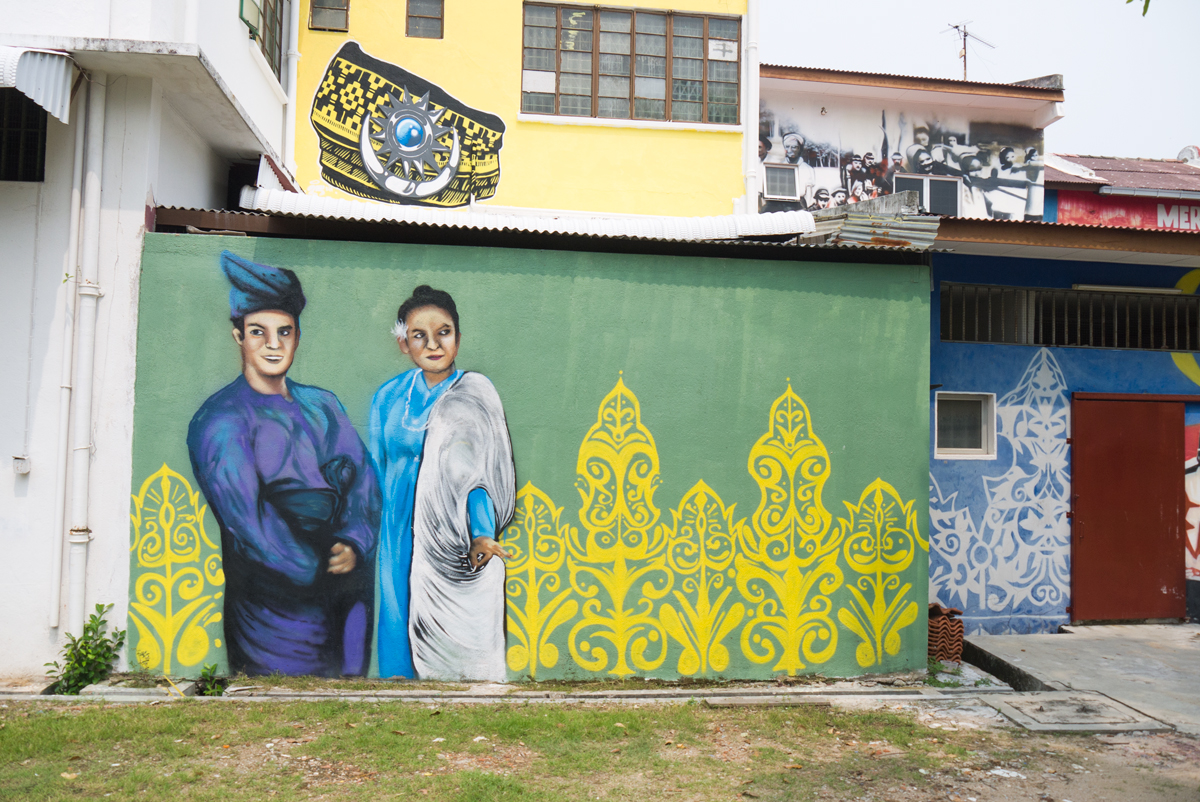 The air was still full of haze when the bus to Malacca entered the Malaysian state. I had never heard the word “haze” before and when I experienced it for the first time it kind of shocked me. It’s an air pollution affecting several countries in Southeast Asia caused by forest fires resulting from illegal slash-and-burn practices, principally on the Indonesian islands of Sumatra and Kalimantan, which then spread quickly in the dry season (source). Depending on the wind direction Singapore and Malaysia are affected very badly. And this was what I experienced on my last day in Singapore and on the first days in Malaysia. It showed me how strongly connected everything is – when stupid people in Indonesia burn wood illegally so many other people have to suffer from this (not to mention the nature itself!).

But back to my journey. After staying in Singapore for one week I took the bus to Malacca – the oldest Malaysian city in the Straits of Malacca. All times the seaport has played an important role in trade because of its advantageous position at the sea route from India to China. The city evolved into a thriving trade port where Arabs, Indians and Chinese bartered their goods. Later Malacca was colonized by the Portuguese, the Dutch and the British. This is why you can still find architectural influences of these colonial powers in the city.

Malaysia is separated from Singapore by a small strait – The Strait of Johor. There are two bridges that connect the countries. My bus took the western one. Entering Malaysia was a lot easier than I had expected and the busses were so comfortable! My solo seat was almost like an armchair 🙂 with a massage function and a lot of leg room. And the aircon was not as cold as I had expected. So I can highly recommend the Starmart Express busses! We passed two immigration points where we had to exit the bus and queue to get the departure stamp from Singapore and the arrival stamp from Malaysia.

The solo travel part of my journey had just begone and I was a pretty excited. Luckily it was just on this bus ride that I met two other female solo travelers: Konstanze from Germany and Isabella from Italy. We shared a taxi to the city center and spend the next days in Malacca together.

Konstanze, Isabella and me (FLTR)

My first impression of Malacca: Oh my God, how can there be so much traffic in a small city like this!? A city which belongs to UNESCO’s World Heritage sites and has such a beautiful historic district! Cars and motorcycles everywhere… it was just a few weeks later that I realized that the traffic is a big problem in almost every Asian city. And that cities in Asia are very different from European cities. In Europe I love to explore cities. I love to walk around the streets, absorb the urban atmosphere, watch people, sit in cafes, visit museums and other cultural places… in Malaysia and Bangkok already the climate kept me from this accustomed travel manner. It’s just too exhausting to walk around the streets all day long when you have an average temperature of 30°C, a humidity of 90%, smog and occasionally appearing haze.

The Apa Kaba Guesthouse – my retreat

Luckily I booked a room at the Apa Kaba Guesthouse which was like a little green oasis! 🙂 When I entered the beautiful garden together with Konstanze and Isabella I was surrounded by playing kids and cats. I felt immediately very welcome. The place had a warm and open-minded atmosphere that I liked a lot. Very down to earth.

Every morning the family served homemade delicacies like banana cake, Roti Canai (an Indian flat bread), Kuih (various bite-size pastries of different taste) as well as fresh fruits, coffee and black tea. The breakfast was served in the local kitchen and you always met other travellers or family members for a little chat.

the entrance of the guesthouse

A little look into Malacca’s history

As I already mentioned Malacca was an embattled ground among the European conquerors. After being an Islamic sultanate from 1396 to 1511 the Portuguese conquered Malacca and expelled the ruling sultan. After several wars between the Portuguese and two Malaysian sultanates (Aceh and Johor) the Dutch East India Company arrived and allied with the sultanate of Johor to expel the Portuguese from Malacca.

In 1641 the Dutch succeeded at overtaking the seaport and expand the size of the city fort as well as building additional infrastructure.

After some stop-go policies Malacca was officially handed to the British in 1825 and integrated as part of the Straits Settlements. The city remained under British control until 1946 (except for a short period during World War II when it was conquered by the Japanese).

The historic site of Malacca

On my second day in Malacca I visited some touristic hot spots together with my European fellow travellers. We started our tour at the St. Paul’s Hill. In past times the hill had been the city center of Malacca and the different colonial rulers had established religious and politically important buildings arround it such as the Portuguese fortress A Famosa and the Dutch Stadthuys. Nowadays the hill and its surrounding area belongs to the historic district and contains a lot of museums.

At the top of St. Paul’s Hill there is a church – the oldest church building in Malaysia and Southeast Asia to be exact – it was built by the Portuguese in 1521 and reconsecrated by the Dutch after they had taken over the city. The British just used it as a powder magazine and the building deteriorated.

It was at the edge of that old church where I met a very interesting man. An old artist, selling this artworks. When I passed him he addressed me and asked: “Where are you from?” When I replied that I was from Germany he started enumerating some German cities. Among them was Düsseldorf. And I said to him: “Well, my city is close to Düsseldorf”. Because he had almost been right he wanted to make me a present.

He picked up a small bag which was lying next to him and hold it out to me. “Choose one” he said. The bag was filled with little brown envelopes. I picked on of them and he opened it. The envelope contained a small artwork. The background was painted in dark blue and violet tones reminding me of the sea reflecting an almost dark sunset heaven. In front of the colored ground the artist had subtly drawn a the silhouette of an angler holding a huge fishing rod in his hands. “The meaning of this artwork is ‘patience'” the artist said. I was immediately enchanted 🙂 What a wonderful gift I had received!

front of the little artwork

back of the little artwork

As I already said the atmosphere of the history-charged city was overshadowed by the mass of cars and motorcycles that inched through the streets. Not even the historical district was protected against smog and noise. This made the sightseeing a bit exhausting. Only for the famous Jonker Walk Night Market they close the street to traffic.

Nevertheless I was able to find some nice little streets with a unique atmosphere on my third day (only a few hours before I had to leave the city again). Together with Konstanze and Isabella I crossed the bridge next to Sungai Melaka and walked along the river to the north. We were more than surprised to find colorfully painted houses along the riverside showing traditional Malay clothing with Chinese, Indian and Arab influence 🙂

Colorful houses along the Malacca River

The district that I found most attractive in terms of architecture, atmosphere and details was China Town. I had already seen the typical shop houses in Singapore but here in Malacca they appeared to be even more authentic.

The neighbourhood of Apa Kaba guesthouse

Mural next to a Belgian Bar

The rickshaw was a common vehicle for tourists in all the cities I visited during my journey. But in Malacca they had a very special kind of rickshaw 😀 All over they were covered with the trashiest Hello Kitty and Disney toys as well as with colored paper roses. At night the vehicles even started to blink in various colors playing loud music while they were riding the streets. I also took a video of this spectacle. 😉 You can watch it here.

I also found a really nice video of the guesthouse showing some of the city’s hot spots, too 🙂