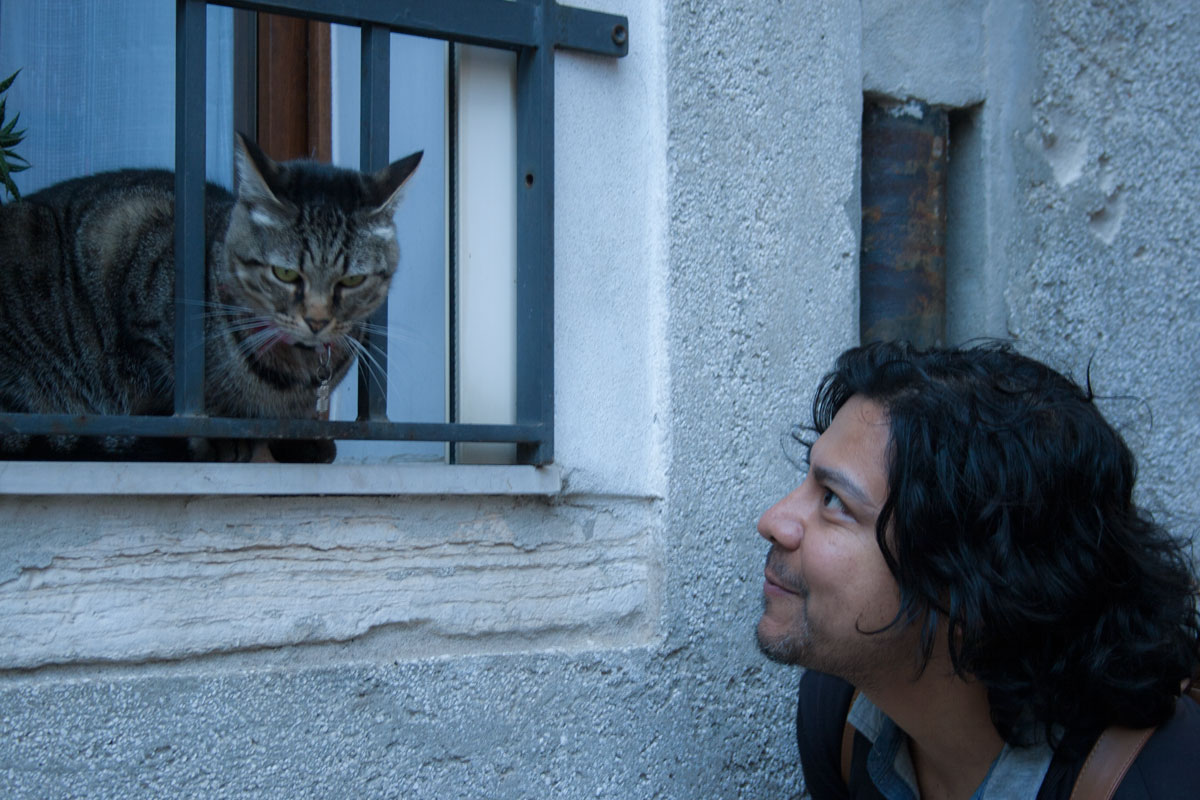 I met Eduardo on a sunny autumn day in the streets of the lonely Island of Burano. Between the little colourful houses that reminded him of a town in Mexico. He was wandering around alone and seemed to enjoy the solitude. Like a lonesome wolf. I wasn’t surprised to read in his couchsurfing profile days later that one of his favorite books is “El lobo estepario” – the Spanish version of the novel “Steppenwolf” by the German author Hermann Hesse. Yes, Eduardo reminded me of a wolf. But a good one 😉 A peaceful wolf with curious shining eyes.

And Eduardo “El lobo” joined our group. “Our group” that was Rozka from Egypt, Jelena from Serbia, Nicolas and Tiphaine from France – a multi-cultural group that had just formed the evening before in the common area of the Generator Hostel – our mutual base in Venice.

Rozka was the first Egyptian man I ever met and to be honest I never thought Egyptians could be that crazy and funny and sociable. Don’t know why. Maybe because the media just shows us a certain face of Egypt that is very different from Europe. And this is why traveling and meeting people from other cultures is soooo important! To eliminate our prejudices! I want to give you an example of how Rozkas mind is working by just quoting his self-description from couchsurfing 😉

CURRENT MISSION
“To lose my attachment retardants, Then Travel and experience the whole vast world. Or in other words “make a whole lot of money and spend every penny of it on a trip for the rest of my life”. …..Okay the real secret mission is “Find a unicorn, make them fart rainbows, bag them in plastic bags -u don’t wanna know how-, then sell them, and use the money for tooth ferry hunting expedition.”
(editor’s note: I think he means the “tooth fairy” :D)

ABOUT ME
“My nickname is Rozza, which in Arabic means a grain of rice, & if u saw me um 195 cm so that was an awful nickname to be called with, but it stuck :D, and recently I knew that Rozza in some languages mean pink, so sometimes I introduce myself with Rozka to avoid being laughed at :D, it’s a big mess :D.
Anyways I like to think of myself as a pragmatic person, I’m ready to try anything new, Flexible, Very social with very wide circle of Acquaintances, reliable, funny to be around -um told that only by seeing my face it’s laugh provoking which I confirm it’s not true :D- and my personal dream is to see everything in this planet or die while trying.”

But on my journeys I’m also keen on meeting locals to gain a deeper insight into the place. And this was the point when Anna entered the stage of Venice 😉 Another Anna. Anna, the Polish art historian. Anna, who works for the Venice Biennale in the third year. And yes she was like the queen of arts. With a brilliant mind. I was kind of absorbing everything she told me about Venice and about her work at the Art Biennale. And then suddenly when we were standing outside a bar having a drink an Irish guy walked along and recognized me from the Generator Hostel. And he took us with him on a little night ride with his boat. Navigating through the dark and silent channels of Venice. In some places – as Anna puts it – it was like in a potential crime scene 😀 But nothing happened! Except from a wonderful experience that will stay in my mind! 🙂