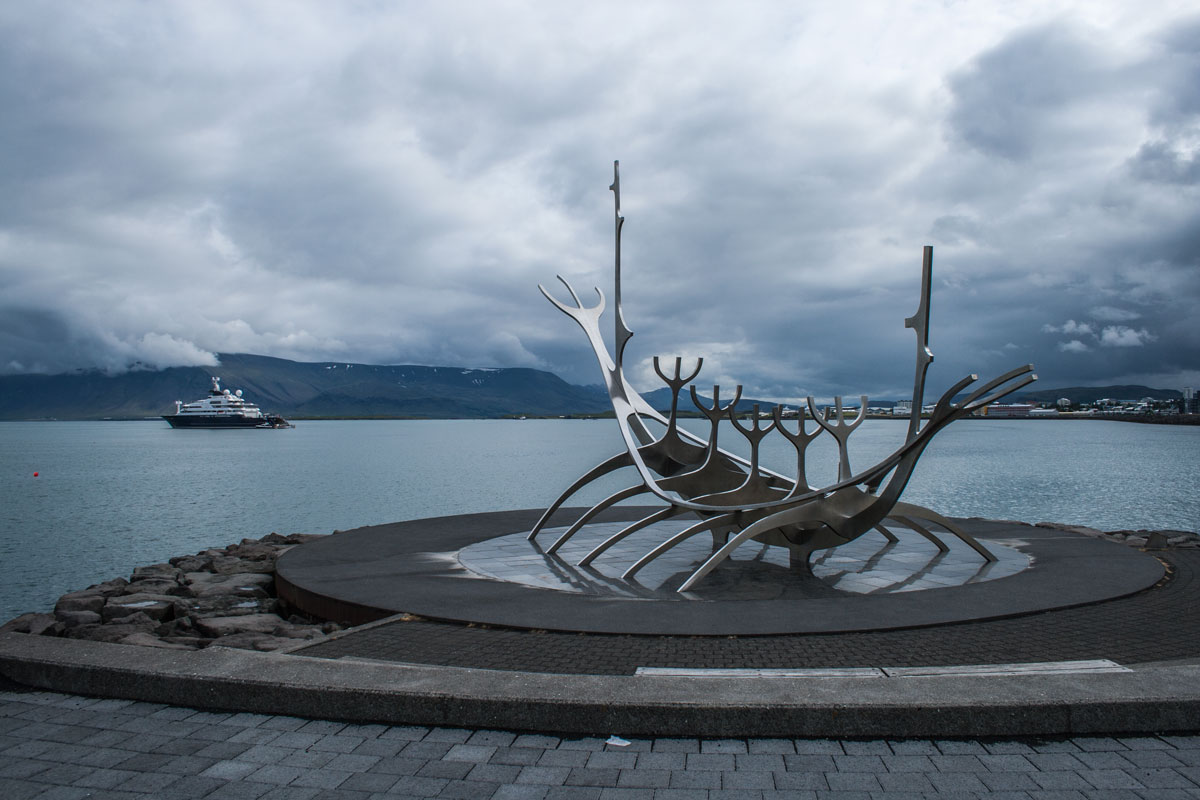 What to do, when your boyfriend suddenly breaks up with you? Well, for a travel soul like me the answer was clear: Jump into the next plane and go somewhere you’ve never been before. ICELAND seemed to be the perfect destination for this plan – a lonely island far away from the European mainland, far away from home and from my everyday life.

So I packed my bags and jumped into the next plane to Reykjavik in Juli this year. By approaching Iceland I became aware of one thing immediately: I’m entering a world where natures rules. As far as the eye could see the ground was covered with black lava rocks.

After a one hour bus ride from the airport Keflavik to Reykjavik I arrived at my Airbnb apartment at arround midnight – outside it was as bright as day but nevertheless everybody was already sleeping (since it was midweek). Fortunately my host had marked the room where I was supposed to spend the next four nights 🙂

I love to travel solo because it’s a more intensive way of traveling. It’s easier to get in touch with locals, you go beyond your comfort zone and this makes you stronger and more self-confident. What made my stay I Reykjavik unique was meeting a lot of interesting and very different people – other travellers as well as locals.

On my first evening I met Janette – a german girl from Düsseldorf who had contacted me via Couchsurfing – in the café of the botanic garden. A really nice place that I can highly recommend. 🙂 Janette had already travelled around Iceland for two weeks and was supposed to spend two more weeks in Iceland’s capital. Even if I normally try to avoid spending too much time with other Germans on my travels to force my self to talk in English and to get to know other cultures it was wonderful to meet her. It was absolutely relieving to talk to a complete stranger about everything I had emotionally gone through in the last month, to exchange travel experiences and to feel less alone in the unknown city. 🙂

Of drunken Icelanders and Mandolin-playing Canadians

There was a Couchsurfing meet-up at a „fancy book shop“ (as the organizer had put it) that evening and Janette and I decided to go there together. I was kind of surprised how many people came together: There was Lloyd, a landscape architect and passionate photographer originally from Canada but at home in the world; María a Spanish baker from San Sebastián spending her semester break in Reykjavik working at an Icelandic bakery; Natalia, another architect from Poland who hitchhiked the ring road around Iceland together with Lloyd (you can find an amazing video about their trip at the bottom of this post) and Apurv a Canadian with Indian roots currently working in Reykjavik and absolutely brilliant in playing the mandolin 🙂

So we started the night at the book shop café Ida Zimsen, moved on to an Irish pub just arround the corner since the organizer (an old Icelander called Ragi) turned out to be a beer-lover and the beer at that pub was extremely cheap (for Icelandic standards). He also bought a round of liquorice booze for us.

As the CS circle started to break up Janette and I decided to join our new friends for a spontaneously arranged mandolin session in Apurv’s guesthouse.

On my last evening in Reykjavik I was lucky to enjoy an Icelandic BBQ als well as a little living room concert at Janette’s guesthouse: The Nordurstjarnan Guesthouse. If you ever go to Reykjavik stay in this guesthouse! 🙂 I was hearty welcomed by the owner (an alternative Icelandic couple) and the other guests and we had a huge meal together topped off by a little concert: Apurv whom Janette and I had met at the CS meet-up introduced us to classic Indian music performed on a mandolin. I’ve never heard sounds like this before! 🙂 I took a short video of his performance:


Here are few pictures from the evening 🙂

Résumé: Traveling and meeting new people is a perfect way to get over a broken love! So use the Couchsurfing community spirit to get in touch with locals and other travellers! Visit CS meet-ups and stay in nice guesthouses like the Nordurstjarnan. We all belong to a huge global family! 🙂

To see more pictures from Iceland’s nature you can also take a look at Lloyd’s website.