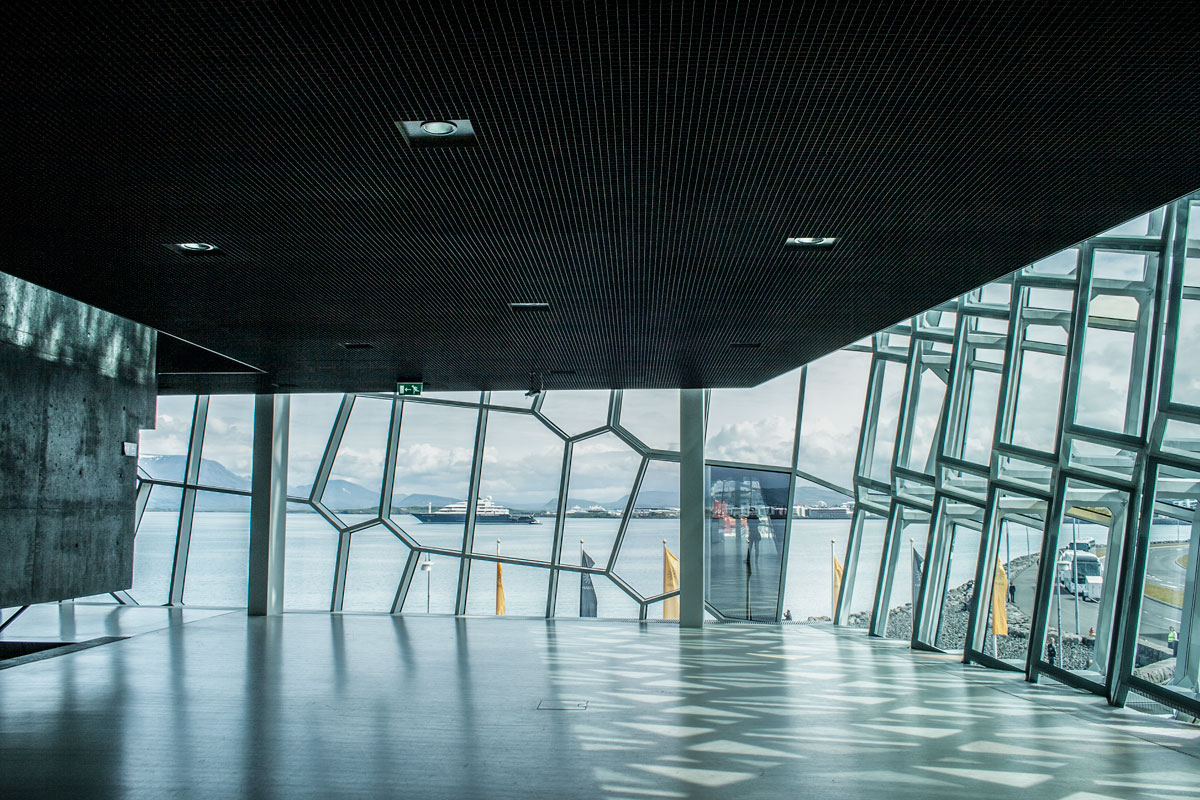 There are two buildings in Reykjavik that deeply impressed me. Both with a unique character. In this first part of impressive Icelandic architecture I will show you the wonderful HARPA – a futuristic concert and conference hall at the old harbour of Reykjavik right beside the sea.

Inspired by Iceland’s exceptional landscape and its diverse lightning atmosphere HARPA was designed by Henning Larsen Architects (Denmark) and Batteríið Architects (Iceland) in cooperation with the Danish-Icelandic artist Olafur Eliasson. The two building blocks with angular edges are revetted with a filigree honeycombed steel framework. The space in between is filled with reflecting glass elements that change their colour according to the light of the day and the weather.

The name “HARPA” is the result of a competition organized in the year 2009 to find an Icelandic name that is easy to pronounce in every language. The word has different meanings. On the one hand it’s an Icelandic woman’s name and means harp on the other hand it’s the first summer month of the Old Icelandic calendar. Ever since the beginning of the summer and the end of the dark half-year played an important role and was celebrated. It’s still an annual public holiday (sumardagurinn fyrsti). The imagery of the Harpa logo refers to this context. The twelve tuning forks arranged in a circle sum up the twelve month. Moreover the shape symbolises the sun as well as an abstract snow flake.

But the concert hall is not just impressive from the outside. It also has to offer a unique inside. There are four main halls with different themes:

Eldborg – the main hall of Harpa was named after one of the most recognised Icelandic volcanos: Elborg. The Icelandic word means “Fire Castle” and that’s also what the hall looks like – the ceiling and the decor all coloured in deep red.

Norðurljós – the name of the recital hall means “Northern Lights” and refers to the typical Icelandic aurora borealis that you can spot in winter days. The room has a blue-white lighting atmosphere.

Silfurberg – the “Silver Rock” is a conference hall with light grey walls. It’s probably named after a silver-grey rock outcrop at the southern side of the tuya Ingólfsfjall in the south of Iceland.

Kaldalón – so-called from an ice front bay in the Western Fjords where the composer Sigvaldi Kaldalóns lived for a while and named himself after the bay. Kaldalón means “cold lagoon” and the hall contains the auditorium.

As you can see the Icelandic nature was not only a source of inspiration for the architectural main construction of the Harpa but also for this interior. Here are some pictures of the four main halls:

For those of you who have a partiality for architecture there is a very interesting film about the architectural construction of Harpa including interviews with Olafur Eliasson and the two contributing architectural offices:

Created 1994 in Barcelona, “Sónar” evolve into a global festival for electronic music and digital culture. To fight the cold and dark winter time in the northernmost capital Sónar Reykjavik was brought into being.

During Sónar Reykjavík 2015 everyone could play the classic arcade game ‘Pong’ on the south façade of Harpa concert hall using a smart phone. Multimedia artists Atli Bollason and Owen Hindley (owenhindley.co.uk) created a platform that allowed you to log on to a special network, join a virtual queue and then take control of either paddle by tilting your device. The game itself was rendered in real-time on Harpa’s facade using the 714 LED lights installed in the 43m high steel frame. Between games an audio feed from Sónar’s main stage SónarHall controlled the lights as they cycled through a number of custom-made audio reactive visualizations. (Source)

PONG+ during Sónar Reykjavík 2015 from Atli Bollason on Vimeo.